Ever wanted to use the Terra Blade in Minecraft? How about other cool projectile weapons from Terraria? Well in this add-on, you finally can! You also get 2 new NPCs that will sell you these weapons, and maybe help you defend your base!

Keep in mind these aren’t just retextured swords with potions of strength, they ACTUALLY work! The Paladin’s Hammer works like a boomerang, the Terra Blade shoots a green projectile, shurikens can be thrown, and many more!

This is just the beta release, most of the items are obtained in other ways, I’ll make them more accurate in the future (e.x. Paladins will actually drop the Paladin’s Hammer, the True Excalibur will cost Hallowed Bars, etc.) I’m also planning to add more weapons in the future, including summoner ones. Feedback and ideas are welcome, including suggestions for other weapons.

Enable experimental gameplay to use this add-on.

NOTE: Because this add-on edits the player entity file, this may not work with other add-ons that are similar (like weapon add-ons, etc.), so be careful! 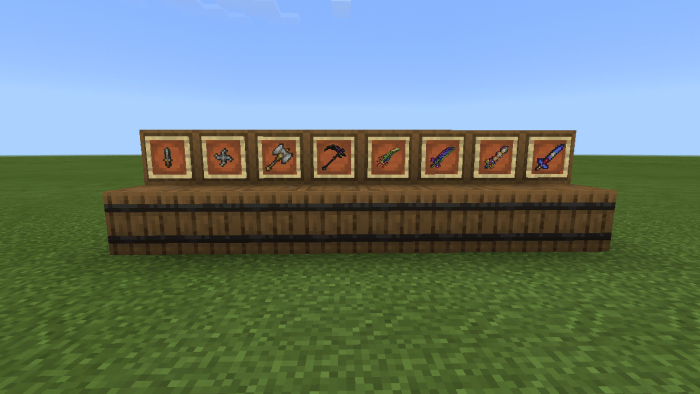 8 new weapons are added to the game in this version. To use them, simply press and hold on the screen (or right-click on pc) like you’re eating an apple. Some weapons can also be used like normal swords, but are much stronger!

Note that these weapons were rebalanced to fit the nature of Minecraft (as the Terra Blade would easily sweep any boss if it were the original).

These are consumable weapons that you can throw at enemies. These do not pierce and can’t be picked up after. Shurikens do 5 damage when thrown, but only deal 1 damage when used like a sword, and will also break quickly, so it’s better to throw them. You can buy them from the Merchant NPC.

Throwing knives are a stronger version of the shurikens, and can also be bought from the Merchant NPC. They also do not pierce, can’t be picked up after, and will break easily when used as a sword. When thrown, throwing knives do 7 damage.

The Paladin’s Hammer is a boomerang weapon. It is a short range boomerang that does 8 damage when thrown, can pierce, and can be used continuously! You can buy these from the Traveling Merchant.

This particular version was inspired by @CodanRaigen21, so be sure to thank him as well!

The Death Sickle is a strong scythe that works as a sword, and as a projectile weapon. It fires a purple swinging scythe that floats for a while in a direction, continuously piercing and dealing damage to enemies that are in the way, before disappearing. Both the scythe and projectile deal 25 damage, and can be bought from the Traveling Merchant.

The True Excalibur is a strong sword that fires a pink projectile in a direction that can’t pierce. The projectile travels a small distance, before disappearing. Both the sword and projectile deal 35 damage, and can be bought from the Traveling Merchant.

You’ll also need this weapon to craft the Terra Blade later on!

The True Night’s Edge is a stronger sword compared to the True Excalibur, and fires a green spinning projectile that can’t pierce. This projectile travels a small distance, before disappearing. Both the sword and projectile deal 40 damage, and can be bought from the Traveling Merchant.

You’ll also need this weapon to craft the Terra Blade later on! 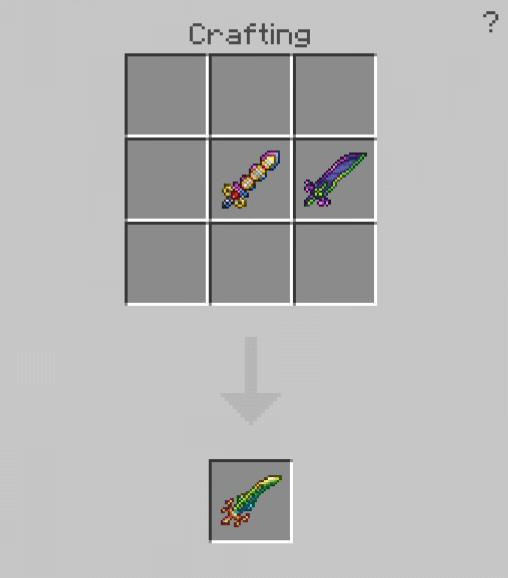 You can craft the Terra Blade by combining a True Excalibur and True Night’s Edge in a crafting table. You can put them on any grid and mix them up, as long as both weapons are horizontal.

The Enchanted Sword is a beam sword that you can obtain early game, but can be quite rare. The sword fires a blue projectile that can’t pierce, and can travel a short distance before disappearing. Both the sword and projectile deal 12 damage. You can only get the Enchanted Sword by finding a Sword in the Stone that has it, and break it. 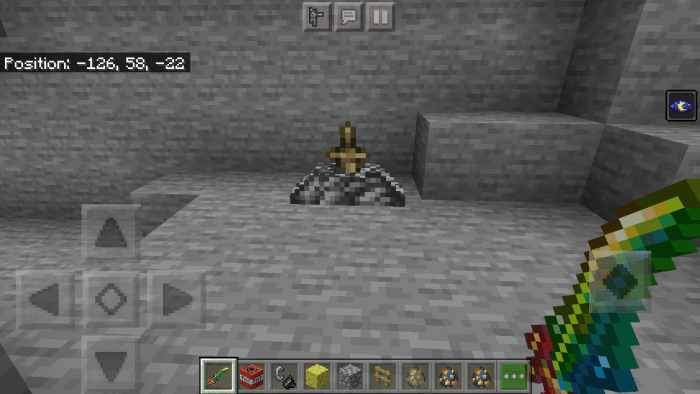 The Sword in the Stone with a fake sword only drops cobblestone. 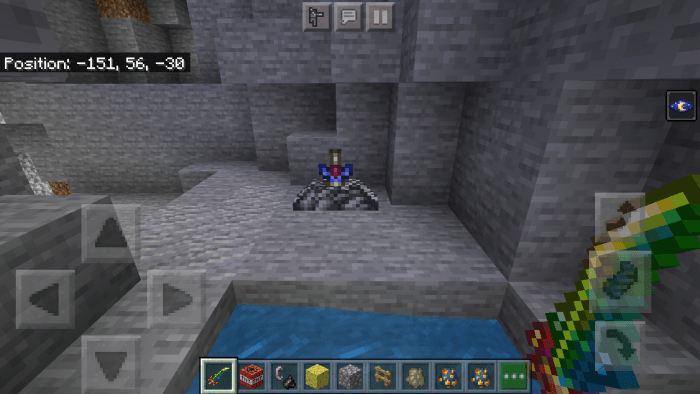 While the stone with the real Enchanted Sword will drop the real thing. A Sword in the Stone can spawn underground, and has a small chance to hold an Enchanted Sword, so keep looking!

At the moment only the Terra Blade and Enchanted Sword have particles, I’ll add more in the future! Here’s a close comparison of the 2 weapons with their original counterparts:

The Merchant and Traveling Merchant have reached Minecraft! These NPCs sell a variety of items, and can also defend themselves. They also make the Chat sound when you open their trades, like in the original game 😁

The Merchant is an NPC vendor that sells a variety of items, including the 2 new throwable weapons. It can spawn during the day, you’ll know one is near by looking at the message at the top left. 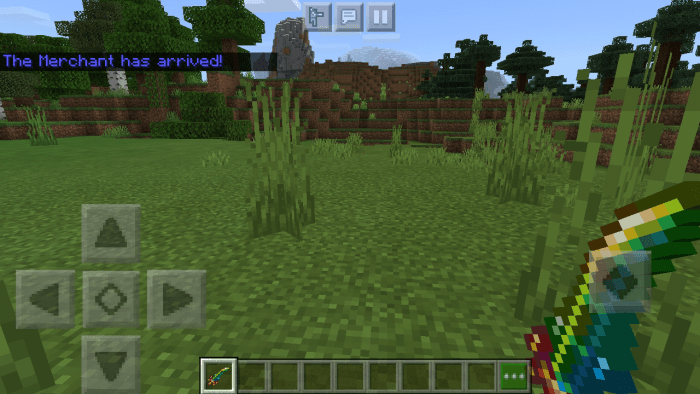 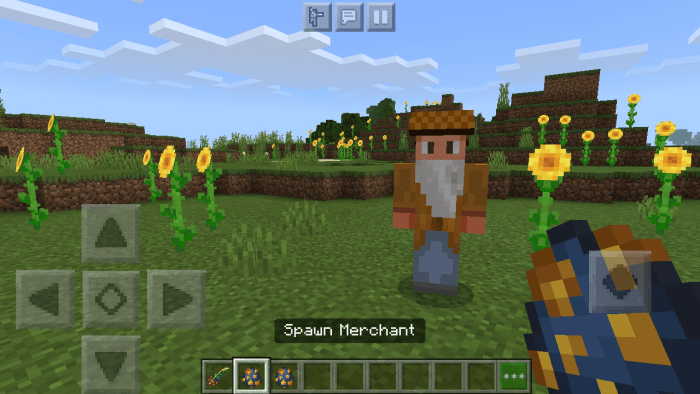 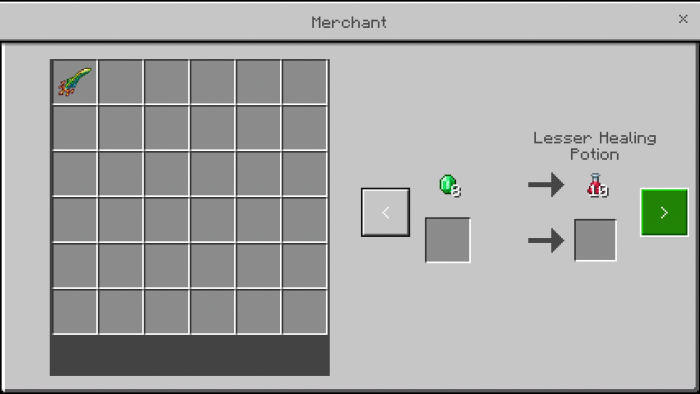 The Merchant also sells lesser healing potion, which can help you early game! 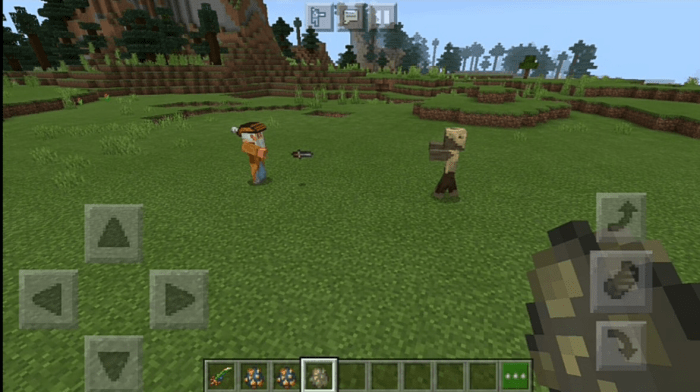 The Merchant defends himself by throwing knives at enemies, and will run a few blocks away when hit.

The Traveling Merchant is a unique NPC vendor that sells a variety of items that change randomly each day. He can spawn randomly during the day, and will despawn the next day, from early dawn to day. 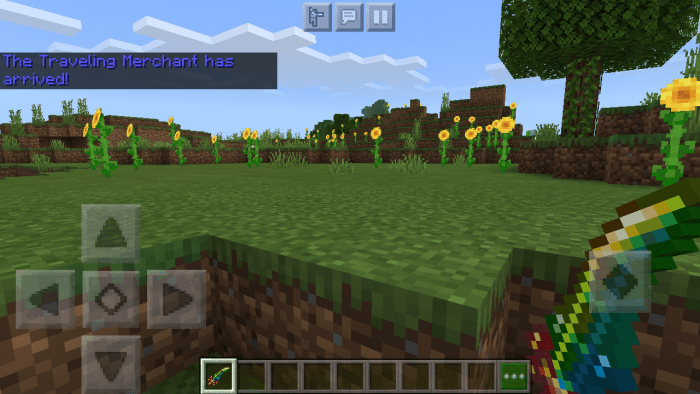 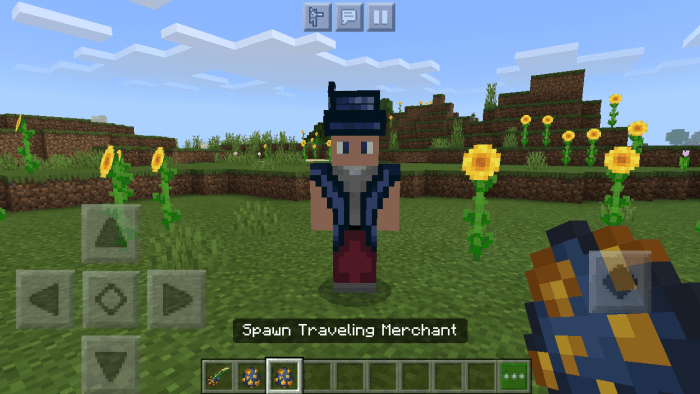 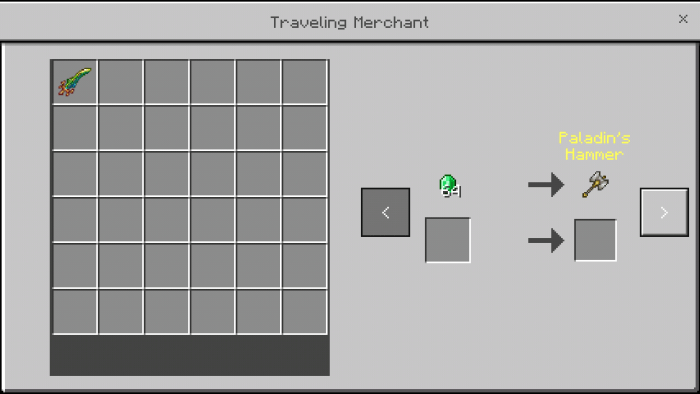 The Traveling Merchant has a unique trade system, where he will sell 2 out of 12 items, which randomly change each day. There is a chance that he sells 1 of the 4 unique weapons as well. 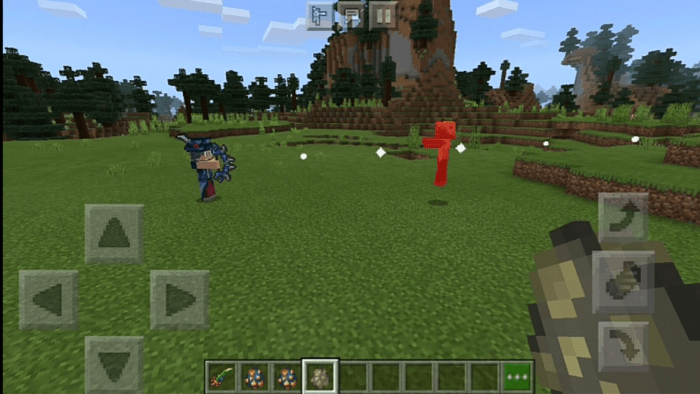 When enemies are nearby, he defends himself with a Pulse Bow (not in the mod yet), and will also run a few blocks away when hit.

Below is a quick guide on the add-on: